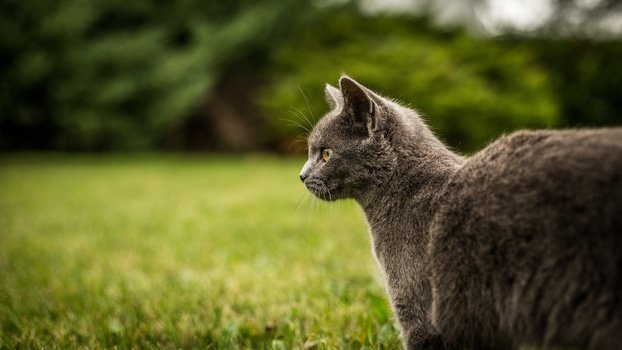 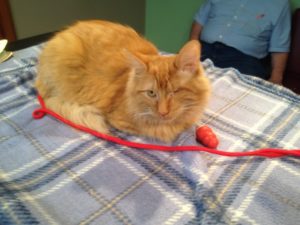 Background: This kitten was presented at my practice for pouncing, biting, and scratching at both owners in the household. He was adopted through another veterinary clinic as a stray at 4 weeks of age. The pouncing and biting behavior began immediately after adoption, and was intensifying to the point of level 3 bites to the arms and feet of the owners.

History:  Prior to adoption, the kitten was presented to the primary clinic semi-conscious after being hit in the head with a weed whacker. There were deep lacerations on the head; the left eye was enlarged, bloody, and bruised, and there were lacerations around the rectal area. All the wounds were treated; the kitten then lived at the veterinary clinic and was adopted by a family a week later. Two weeks after that, the left eye was removed due to unresponsive glaucoma from the injury and the kitten—called Blade—was neutered.

While at the clinic, the kitten was housed alone, not in a common area with other cats. The staff member who bottle-fed the kitten would play with him using their hands for pouncing and predatory play games.

Behavioral History: The kitten was brought in for an exam three months after adoption. He was extremely difficult for the veterinary staff to examine or touch at all, despite previously being calm for his exams.. The staff abandoned the exam for the day and sent home a calming supplement, Composure Pro. They were able to do a minimal exam and vaccinations a few days later. The kitten was started on the “Calm” diet by Royal Canin—which supplements tryptophan, milk-derived calming protein and B vitamins—about a month later. A month after this, the client called the primary care veterinarian complaining about the owner-directed aggression, and was referred to the veterinary behavior consultant.

The husband would play with the kitten with balls and toys on a string, and feed the kitten; he was rarely bitten or aggressed upon. The wife would walk around in a long gown that the kitten would pounce on, grab, and then bite her ankles. When the wife would sit by the kitten she would continually pet him until he would turn and bite her forearm and hands, puncturing the skin. The wife would become quite upset and this would increase the aggression towards her. The kitten would also suck on and lick blankets, and chew on drawer pulls and other items. There was no use of aversive punishers; isolating the kitten from the wife was the current solution to avoiding aggression. The family was at the point of considering rehoming, but the degree of aggression was so severe that they did not feel this was a responsible solution.

Behavior evaluation:  This kitten has owner-directed aggression and handling aggression triggered by elevated sensitivity to touch, conditioning to grab and bite from play conditioning prior to adoption, lack of socialization to household noises and movement from the early age of weaning, and an absence of bite inhibition from lack of littermate play. His increased mouthing and chewing may be residual nursing behavior or a compulsive displacement behavior due to anxiety.

Consultation examination: Gabapentin 100mg was dosed 2 hours before the examination, with Feliway pheromone used in the carrier. A physical exam was performed with no physical restraint—any touch would elicit hissing but no struggle. Tuna was fed continuously for all parts of the physical exam, and the kitten ate throughout. Temperature was taken using an ear thermometer without obvious anxiety. Every time the veterinarian touched the kitten’s body with a stethoscope, or even just a hand, the kitten would hiss and freeze. The kitten was very sensitive to movement and noise, but did not escalate past hissing. This was a marked reduction in aggression from the last exam at the primary care veterinarian.

Plan:  The clients were instructed to continue on the “Calm” diet, adding 75 mg Zylkene milk-derived calming protein supplement and 50 mg gabapentin in the morning. One hour after the medications were given (in canned food) the kitten was allowed up in the common area. In the evening, the kitten was kept isolated in the basement. The husband was instructed to start three 15-minute daily play sessions, focusing on predatory play outlets using stuffed and feather toys. The kitten was also fitted with a harness and had outdoor time for play and walks with the husband. The wife was not agreeable to participate in the behavior modification plan.  When the wife was around, the husband was to toss food and treats to direct the kitten away from the wife. When the wife would gesture, the husband would toss treats and call the kitten to him.

Second consultation: Two weeks later, the kitten was no longer grabbing onto the husband at all, and had stopped grabbing at the wife’s feet. The wife still petted the kitten excessively and would not participate in the counter-conditioning sessions. The kitten was much less sensitive to touch or sound at the examination. I demonstrated how to use the tuna for counter-conditioning to touch, and instructed the husband to feed the kitten tuna whenever the wife was touching the kitten or gesturing in an animated way. I instructed to continue the “Calm” diet, gabapentin, and Zylkene supplement. I also sent the client home with a small food puzzle and instructed to use more food puzzles to move the chewing behavior onto more appropriate items.

After the consultation: Two weeks after the last consult, the kitten would ride in the husband’s car on harness and leash, and calmly allow strangers to pet him all the way down the back. All biting had stopped on the husband, and the kitten was not pouncing on the wife or biting her. The kitten would hiss occasionally but did not escalate higher than that around the wife. The husband brought the kitten into the primary care veterinarian’s office for a visit just on a harness, not in a carrier. The kitten allowed the staff to pet him, and remained calm even when a large dog came into the waiting area. This was a marked improvement in his level of anxious behavior from the last veterinary visit.

Conclusion: This kitten had multiple factors that affected how sensitive he was to touch. The traumatic head injury at 2 weeks old may have affected brain and sensory development, resulting in aggression. He was also conditioned to play with hands in a way that reinforced grabbing and biting. Early intervention before severe injury to the owners, as well as proper medication choice that addressed the physical signs of the behavior, were essential to improving this kitten’s behavior in a short period of time. As time goes on it will be important to continually assess the kitten’s level of touch and sound sensitivity, since scarring of brain tissue is still a possibility.

Sally J. Foote DVM, CABC-IAABC, UIUC CVM 1984 is a small animal general practitioner with a behavior practice in Tuscola, Illinois. She is the president-elect of the American Veterinary Society of Animal Behavior, an advisory board member to the Fear Free℠ Practice board, contributor to the Fear Free℠ certification program, and executive director of Cattledog Publishing—the legacy of Dr. Sophia Yin.