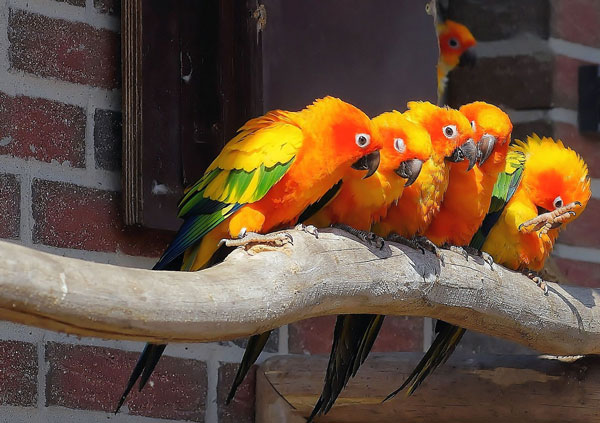 Animal behavior consultants come from all walks of life. One of the most common questions IAABC gets is about how to get started working with pets and their people. The truth is, there’s no set career path, and no single qualification that prepares you for this uniquely challenging, endlessly fascinating work.  In this series, we’ll be talking to each of our IAABC division chairs about how they made their love of animals into their profession.

This issue we interviewed our Parrot Division chair, Stephanie Edlund, about how she became Sweden’s only professional avian behavior consultant.

When did you decide to pursue behavior as a profession?

I’m not entirely certain when I first decided that working with behavior specifically was what I wanted to do – but as for deciding to work with animals, that was pretty early on! My aunt has an interview with me back from when I was 5 years old, in which I proudly stated that I would be a zoologist or marine biologist when I grew up. For someone who feels a bit all over the place most of the time, I guess I’ve been pretty goal oriented after all! I think wanting to work with behavior as a career was something that slowly grew as I learned more and had the chance to practice my new skills at home, and at my work as a zookeeper. It was very addictive and just the kind of work I’ve always been best suited for: a mix of theoretical knowledge, nitty-gritty practical application and problem solving.

One of my first clients that really sticks out was a board-and-train case. It was this lovely old African Grey that belonged to a very sweet old lady. She loved him but couldn’t handle him at all, and this bird hadn’t left his cage in many years, sadly.  She was going away for a couple of weeks, so we figured he would stay at my place and I would start working with him. We got very far in that short amount of time; he learned how to step up and regain some trust, learned how to forage for his food, and eventually dared to spend a bit of time outside his cage. I learned so much from that case, and seeing how much positive influence I could have over both the parrot’s and the person’s lives was really thrilling, and it definitely left me wanting more.

How did you get started in your behavior education?

My first real experience with animal behavior in a more professional setting was back when I started studying to become a zookeeper at a school here in Sweden. (Which I guess would be the equivalent of American high school, although our system is generally very different!) I got the chance to study ethology and do a lot of practical behavioral studies. I was especially interested in animal welfare and enrichment, and did a lot of work on those topics.

During my last year of that three-year program I was lucky enough to meet Susan Friedman and attend a weekend version of her Living and Learning with Animals class here. I had been doing a bit of clicker training with birds before that, but when I was introduced to ABA properly in her course, I felt like I finally found that piece of the puzzle that was missing, and my infatuation with understanding animal behavior definitely became even stronger. I would say it took off for real about then, which was around seven years ago now. Since then I’ve spent a great deal of time and money on education. Learning new things and getting to work them into what I do is probably my favorite thing about this business. And I think it kind of has to be if you want to become good at what you do.

How you got started in developing practical skills?

At first I was mostly self-taught. When I started training parrots, I didn’t know of any trainer near me, except in a zoo, who actually worked with training birds or did it in any kind of professional manner, or even just well. I was pretty young and mostly tried stuff I found on email lists and online forums about clicker training birds at first. As I learned more I tried recording myself training as much as I could, but it was pretty tricky—camera phones weren’t very common yet, so I only had a webcam on a desktop computer to do it with! Later I was lucky enough to attend a lot of workshops and get much-needed practical feedback. When it comes to the hands-on aspect of dealing with behavior cases, I just did my best to translate what I knew about the theory and what I had learned from the available experts overseas so that it would work in practice. It would definitely have been a lot easier and initially more successful with a personal mentor!

How did you know when you were ready to take on private clients?

I didn’t! In hindsight, I wasn’t ready at all when I first started, and ironically I think I felt on top of things in the beginning, but gradually started feeling less and less ready as I did more and more work.  I’m the only professional parrot behavior consultant I know of in my country, and definitely the only certified one. Since there really weren’t many people to turn to for hands-on help, and I had such a big interest in behavior, I received a lot of questions about it. I helped many people try to problem-solve in a less structured manner for quite a few years before I started offering more formal services. At first when I tried it out as a business I only took on less severe cases on a paid basis, but still helped with some more difficult ones free of charge, since there simply weren’t that many other options for people to turn to most of the time. Not an ideal beginning at all, and I probably made a lot of mistakes that could have been avoided under different circumstances.

What do you wish you’d known when you were starting out?

How much I didn’t know! But also, to be a bit contradictory, that you can’t know everything when you start, and that it has to be okay as long as you are humble about it to yourself and your clients, and do your best to continually fill in the gaps in your own knowledge and skills. And of course, it’s important to reach out for help when you need it. Assessing your own competence is really tricky, which is why organizations like the IAABC are so important.

And the importance of people skills, definitely! Knowing how best to work with the humans as well as their animals was probably my biggest obstacle early on. Also knowing that professional people skills are something you can learn and practice, not something you are born with.

Any challenging times where you questioned your decision to pursue behavior as a career? What did you do to overcome them?

Oh, definitely. I have a bad habit of being very critical towards myself, so I tend to question if I have what it takes pretty often. It does happen less and less with experience, though. Caring too much is an ongoing challenge that I think most consultants can relate to, too. That is probably the biggest one for me, so developing (mostly) healthy coping strategies is really important.

What resources are available now that you wish you’d been able to take advantage of back in the day?

If you’re interested in pursuing a career as an animal behavior consultant and you’d like to learn more, our series of articles, “Animal Behavior Consulting 101,” covers all the most common questions. For a thorough introduction to the knowledge and skills you need to be successful, consider signing up for IAABC’s Animal Behavior Consulting: Principles & Practice online course—check out the syllabus on our website.