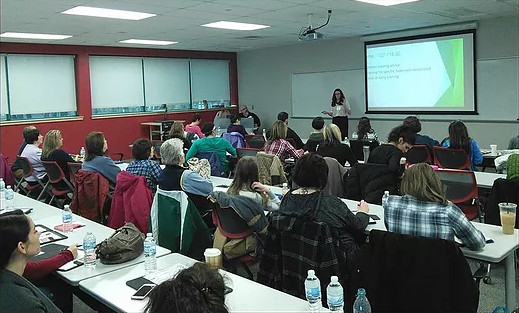 Animal behavior consultants come from all walks of life. One of the most common questions IAABC gets is about how to get started working with pets and their people. The truth is, there’s no set career path, and no single qualification that prepares you for this uniquely challenging, endlessly fascinating work.  In this series, we’ll be talking to each of our IAABC division chairs about how they made their love of animals into their profession.

This issue, we talked to Shelter Division Co-Chair Katenna Jones about her work, and how she became an animal behavior consultant.

When did you decide to pursue behavior as a profession?

I wanted to work with animals from a very young age, but had no idea what to do. I didn’t want to be a vet for some reason, so in college I studied biology and took all the animal-related courses I could find, hoping I’d figure it out. I was talking to my adviser one day during my senior year, and she told me about an industry called animal behavior. I had no idea this existed but was very excited! I was really into gorillas, so applied at the Diane Fossey Institute to volunteer a year in Rwanda after graduation. Meanwhile, I decided to volunteer at a local animal shelter. I’d never worked with any dogs other than my own, and I was very shy. The staff there saw my purple nails and I guess they assumed I was another college girl there to play with dogs for 20 minutes, so they handed me a leash and sent me back for Snicker—a crazy adolescent German shepherd/ St. Bernard mix. I walked out with him and we walked for three hours. When I came back, they told me Snicker had been something like a test—and I told them my nails were purple because I just earned my purple belt in shaolin kempo! After that, I came every Saturday and walked every single dog in the building without fail, rain or shine. I was hooked. When I graduated and then dealt with a family death, I realized I didn’t want to be far from home and also that I was terrified of bugs…so Rwanda was out. The shelter offered me a job, I had a natural affinity, and the rest is history!

How did you get started in your behavior education?

I was obsessed with animals from birth. I was always reading Ranger Rick or Nat Geo, collecting Wildlife Fact Files, watching Mutual of Omaha, or playing “scientist” in the woods behind my house. I had pet flies, fish, and a hamster, I brought home the class turtle, took my cat on family trips, and begged to save every injured creature I found. I was constantly learning and always a science geek—all my school projects or reports were based on animals. Once I discovered the animal behavior industry and found my affinity with companion animals, I applied and was accepted into a graduate program at Brown University in experimental psychology, where my research was on vocal communications and recognition among dogs.

How did you get started in developing practical skills?

My education began as trial by fire, with some formality added in for good measure. I was the youngest and headed to college, so my parents got a puppy to prevent a quiet house. I figured out how to train her on my own at 17, and she grew up to be an exceptional dog. She was a springer spaniel though, so she made me look better than I was! As an undergraduate, my volunteer work at a local shelter whipped me into shape by making me deal with a variety of personalities, breeds, and species in stressful conditions. I adopted a dog with severe anxiety and fear issues (actually, he adopted me). I did my best to help him but in the end I couldn’t, so that was a big wakeup call for me as to what it was like for pet owners. In graduate school, my research involved dogs living at local shelters, and I worked as a teaching assistant who oversaw hundreds of undergraduates in their animal behavior lab work. I also started a canine behavior lab at three local shelters, where I taught over 700 undergraduates how to train dogs. After graduation, I was hired as a full time animal behaviorist at my local SPCA.

How did you know when you were ready to take on private clients?

In my work at the local SPCA, I found myself giving useful, effective advice. I thought what I was saying was common sense, until I realized it wasn’t. More and more people asked me for help, staff came to me, and eventually colleagues from other shelters and rescues. I started offering free services to adoptees from my shelter for easy cases, then gradually took on harder and harder cases as a natural progression, eventually charging for services to animals not from our facility. I always underestimated my abilities, never took on cases I wasn’t sure I could help, and always told clients when I was at my limit. I would work with adopters and learn along with them. I learned to be honest and open, leave my pride at the door, and ask for help when I needed it. I was not afraid to admit I was wrong or change the way I did something, and I was always learning.

What do you wish you’d known when you were starting out?

When I first started out, I wish I had known things I couldn’t possibly have known! I wish I could have helped more cases, harder cases. I wish I had more patience with frustrating humans, a wider view of the world instead of my own narrow vision. I was judgmental and perhaps short when I shouldn’t have been. I wish I had been better with some people. I also wish I knew then what I know now.

Any challenging times where you questioned your decision to pursue behavior as a career? What did you do to overcome them?

It wasn’t the subject that almost made me throw in the towel, but rather my circumstances. I was preparing to return to graduate school after holiday break, and had an emotional breakdown and collapsed on my parents’ porch. As it turns out, my advisor had a history of abusing students and had been gaslighting me. She was a brilliant woman, and I don’t think it was intentional— in fact, I owe my career and my strength to her. I wouldn’t change a thing, but I’d never do it again! It took a long time to recover from that, and my mother had to live with me for a little while, to keep me going and deal with serious health problems that had developed. In the dead of night, we packed up my office and I let the department chair know I was quitting. However, he made changes, assigned me a new committee, and personally oversaw my thesis. I received therapy and was put on medication that ended up saving my life. When I completed my master’s, it was time to decide if I wanted to be done or find another program to complete my PhD. So, I cold-called Dr. Benjamin Hart at UC Davis, who couldn’t have been more generous. He advised me that, if I wanted to work in rescue, I should not get a PhD. At the time, I would have been overqualified and hard pressed to find work. If I wanted to work in research, then I should get the PhD. He was absolutely right. I would have had too much book smarts and not enough practical skills for where I wanted my career to go. Where I am at the current stage of my career, I’ve been thinking of going back for that PhD.

What resources are available now that you wish you’d been able to take advantage of back then?

I could not be happier with where my career is, and what I do. I don’t wish anything had been different for me. I never had a mentor, and found my own way. It was hard, but it made me strong. However, when I talk to those new to the industry I tell them to find a mentor you trust and who will help you. It can be easier! Take advantage of the resources that are available now—and never, ever stop learning.

If you’re interested in pursuing a career as an animal behavior consultant and you’d like to learn more, our series of articles, “Animal Behavior Consulting 101,” covers all the most common questions. For a thorough introduction to the knowledge and skills you need to be successful, consider signing up for IAABC’s Animal Behavior Consulting: Principles & Practice online course—check out the syllabus on our website.