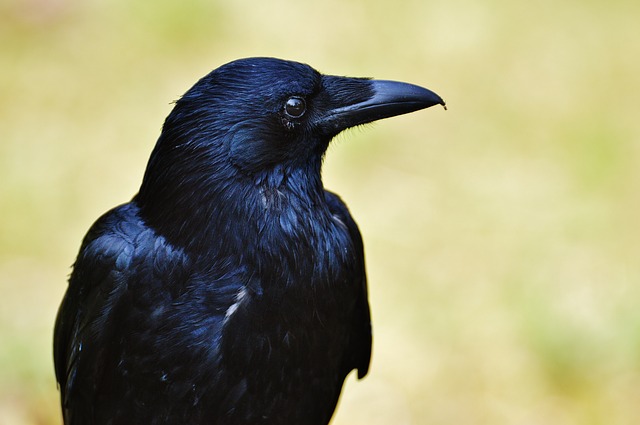 In my last column, I talked about how I trained the crows that visited my garden to come to me on cue, using food to reward them for visiting. Now that I had “my” crows reliably visiting the garden and could attract them whenever I wanted, it seemed like a good time to start changing the environment so I could understand more about their preferences, behaviors, and learning style. The first thing I wanted to learn was how crows reacted to a new object. Would they appear nervous, or curious? Would cautious crows learn from bolder ones, or vice versa?

Animals having surprisingly strong reactions to new things in the environment is something I’m very familiar with from my work with dogs. Through a process of desensitizing and counterconditioning, behaviors that indicate fear will slowly decrease in frequency and intensity, and behaviors that indicate a positive emotional response will take their place. Habituation is another process that I was curious about; this is where repeated exposure to a novel object leads to a decrease in fear- or stress-related behaviors without anyone intervening to provide reinforcement. 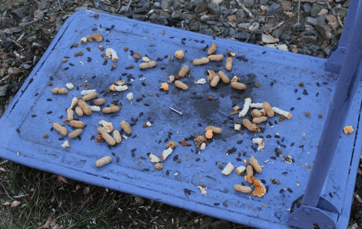 I placed a rolling cart in the yard, and every week or two I placed a different item in the center, surrounded by a mix of food items— peanuts, dry dog kibble, sunflower seeds, and occasionally fruit or bread. I was interested in seeing how long it would take for the crows to retrieve and eat an item of food off the cart, and whether they would take cues from each other in how they behaved around novel objects. As it’s a common piece of folk wisdom that crows are attracted to shiny things, I started with a shiny screw in the center of the cart.

Although the crows came to the yard when I called them in, they avoided the cart. Every crow would start feeding at the opposite end of the yard, away from the cart. After two hours, the crows slowly strutted over toward the end of the yard where the cart was and ate the food sprinkled on the ground. On the second day, the crows once again avoided the cart until approximately three hours into the feeding, when four crows walking side by side presented at the cart. They peered at each other — nervously, I thought — and watched as a squirrel sat on the cart ripping the sunflower seed shells off the meats. After five more minutes, one crow stayed in position, stretched its neck toward the cart and took one tiny sunflower seed from the cart floor. 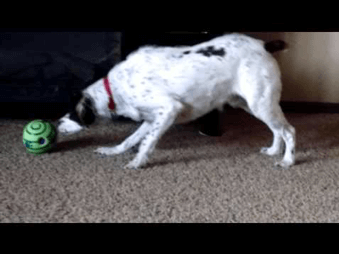 Dog stretching his neck to learn about a new item

I’ve noticed that dogs who have not been desensitized to a new toy, agility tunnel, or household item can show a similar stretching behavior as they try to get information about the item. In one of my dog training classes, I used to run all dogs through an agility tunnel on graduation. Dogs who had never seen a tunnel before would display hesitation at first: They would keep their hind limbs braced and stretch their necks and forebodies to sniff the tunnel. With some coaxing by the owner and positive reinforcement, however, the dog would quickly learn to enjoy running through a tunnel.

The other three crows watched the first crow stretch toward the food. Then, two other crows did the same neck-stretching move while keeping their feet stationary. They were unable to reach the cart in this fashion and had to take a tiny step forward before they were successful. The fourth crow, after observing the other three, hopped over and grabbed a sunflower seed without stretching, then immediately hopped away. 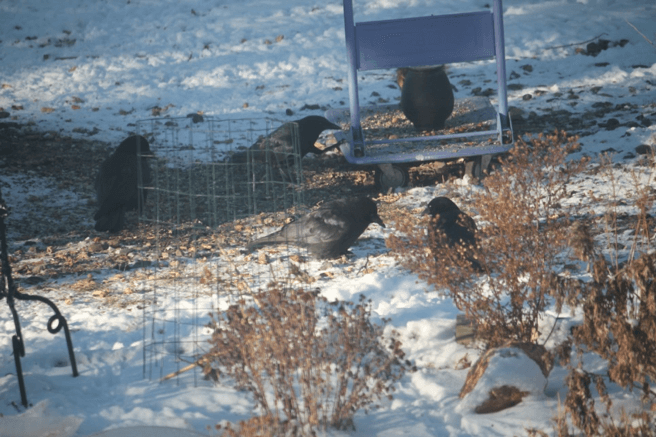 Crow putting their foot on the cart

The first crow in the group then decided to place one foot onto the rim of the cart. They put their foot on the cart and immediately took it off, like the cart was very hot.

They proceeded in this fashion for three more trials before they actually left their foot on the cart and stretched to get more seeds. As the others began to place their feet on the cart and immediately remove them, the first crow jumped onto the cart, and then immediately jumped off, like they got burned again. Then after ten seconds they repeated this behavior but stayed on the cart, right next to the squirrel and the shiny screw, and filled his mouth with sunflower seeds before flying away. Slowly, each of the other crows were able to follow the first crow’s behavior and they all eventually jumped onto the cart and ate.

The next item I tried was a clear shiny superball with glitter inside. 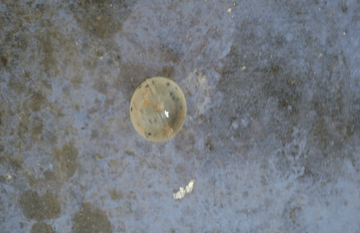 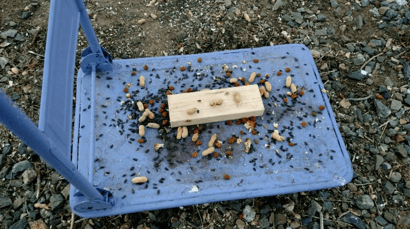 The next item I placed on the cart was a piece of 2 x 4 lumber.

This was the most surprising of all, as it took a full four days for the crows to lose their hesitant behaviors and feed normally. Although the squirrels and blue jays weren’t bothered by it (the squirrels would crawl right over the wood to get food), the crows completely ignored the cart for two days. They ate all the food near the cart on the ground but didn’t approach in a group until the third day. The group of three crows all watched closely as a squirrel sat on their haunches on the cart and ate a peanut. Two of the crows dramatically ducked and looked under the cart, only to find nothing there. Then all three did a neck stretch — being careful not to touch the wood — taking a peanut and eating some dry dog kibble from the cart floor. Neither of them placed a foot on the cart. On day four, I called the crows in, and they ate most of the food strewn throughout the yard, approaching the cart last. One crow looked under the cart before advancing further. Four other crows eventually did the neck stretch routine, or placed a foot on the cart and removed it very quickly, then after about 20 more minutes, finally jumped onto the cart. They then stepped onto the wood and stepped off for a few more trials before they remained on the wood and ate the last of the peanuts. It surprised me that they didn’t approach a non-shiny object for the longest time.

The next three items garnered much less interest from the crows; perhaps because they were now used to the rolling cart with its strange metal surface and had experienced putting their feet on it to take food — or watching their fellows do the same. The next item was a black glass vase. Most of the 40 or so crows in the yard ignored the cart. While I was observing, one looked under the cart before placing a foot onto it and taking some peanuts from the vase. Other crows soon hopped onto the cart and gobbled the peanuts from the top of the vase without hesitation.

The next item was a red plastic vase. The crows weren’t very bothered by this item. They approached the cart the most quickly with this item. During my time observing them, there were a couple of crows who completed two repetitions of putting one foot onto the cart, and three or four crows standing on the cart and feeding. I also noticed that none of the crows did the looking under the cart behavior while I was watching them.

The last item I put out onto the cart was a shiny silver chain and S-hook.  The crows were least intimidated by this shiny pile of metal. After about an hour of feeding in the yard, they approached the cart without hesitation. One crow looked under the cart today, and then jumped onto the cart and fed. 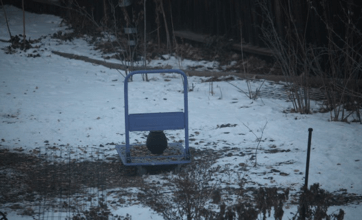 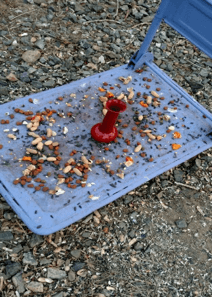 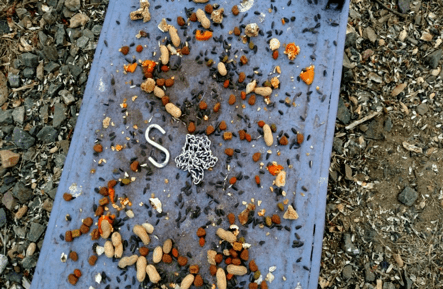 From watching the crows react to these objects, I concluded that the source of most of their hesitation was probably the texture of the rolling cart’s surface, rather than the sight of the objects on the cart. I also concluded that crows did seem to get information from each other about the safety of the cart and how to behave around it. The way the crows approached as a group, almost like a show of force, looked like they felt safer in numbers. 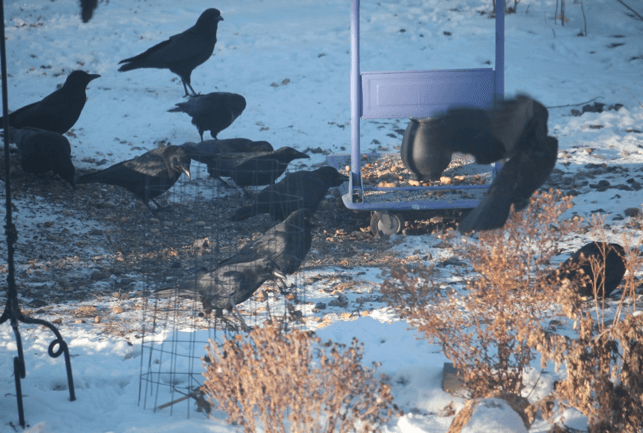 Approaching as a group

The increase in crows deliberately ducking their heads to look under the cart, which I first noticed just one crow doing after it had been startled by a squirrel, suggests that other crows watched and imitated this behavior. The fact that many different crows were in the yard while I was observing them, but the time taken to approach the novel objects and feed dropped considerably, suggests that the whole group was becoming habituated to the presence of the cart and the objects, not just the crows who directly interacted with it while I was observing. One anecdote illustrates both my conclusions quite well: A crow jumped onto the cart, and a clump of dead grass was stuck to her feet. It seemed to completely freak her out; she quickly jumped off and circled the cart before jumping on and right off again, much too fast to take any food. Then a larger crow came over, started squawking, jumped onto the cart and ate. She watched. Later, she jumped onto the cart and ate too.

Camille King, EdD, RN, ACAAB, CDBC, is an applied animal behaviorist who owns Canine Education Center, LLC in Colorado. She specializes in assessment and treatment of dogs with severe aggression and anxiety disorders. Camille conducts professional research on canine stress and mental health issues. When she isn’t working with dogs, she works as an advanced practice registered nurse.