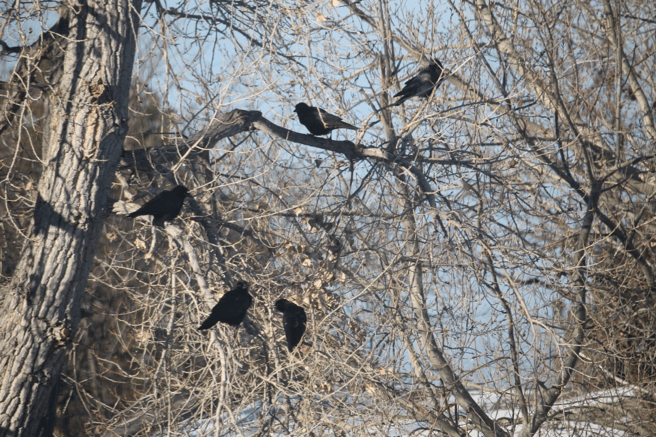 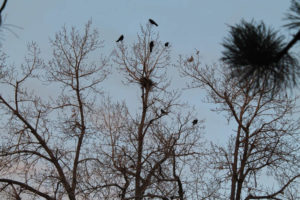 Corvid visitors recalled to my yard

For generations, the American crow (Corvus brachyrhyncos) is a bird with well-established intelligence, especially in problem-solving skills, but it is viewed by many as an agricultural pest causing the destruction of crops, noise pollution—especially at roost sites—and unsightly landscapes from excrement in the environment.

I have been observing the behavior of crows in my back yard for four months, and I’d like to share my notes from the field (or rather, the garden) on different aspects of what they do. As a certified dog behavior consultant, I can’t help comparing the behavior of these wild corvids to that of the canines I work with; I found that there are some striking similarities that have given me a fresh perspective on dogs as well as crows.

This first installment of Calling All Crows will talk about how I taught the crows in my back yard to come to me on cue.

There were a few crows that I saw this past September who frequented the neighborhood. I wanted them to come to the yard, so I could learn more about their culture. I began feeding them a ration of peanuts, dry dog kibble, sunflower seeds, and occasionally, fruit or bread. I usually fed about 7:00 a.m. each day. After a few feedings, I decided to see if I could train them to come to me on cue.

Training a dog using positive reinforcement—providing a food reward—works very well in teaching a reliable recall. One pairs the recall word with the behavior and reinforces with a reward. The basics of this obedience behavior can be taught in a short amount of time. 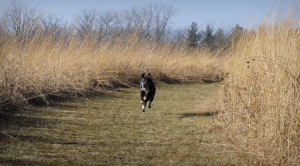 With the crows, I decided to pair the feeding with a unique noise, so I kissed the back of my hand multiple times over four or five seconds. This noise seemed to be a bit louder than other noises. The crows were often in the higher branches of a nearby cottonwood tree, and they would crane their necks to watch me put out the feed. I paired the noise with each feeding for ten consecutive feedings.

Then I went out a bit earlier in the morning. The nights were cooling off and, at times, the temperature would dive below freezing. On these particular mornings, I would add warm water to the bird bath and bird watering pan. Crows seem to enjoy fresh water in which to dip their food items. I watered about 6:30 a.m. as I let the dogs out after their morning meal. When the dogs returned to the house, I went out and prepared for the bird feeding. I called for crows for the first time after the ten initial trials. I noticed crows flying in approximately two minutes from my initial call, which I repeated at 30-second intervals. One crow flew to the cottonwood tree and watched me as I put out the food. They remained silent until I began walking back to the house, at which that time, they made a particular noise, “CAW, CAW, CAW.” This was a very rhythmic sound with about one second interspersed between each syllable. The crow’s chest and upper body raised with each vocalization and their head pointed upwards. I later noted that it was a food call and other crows would fly in to feed.

Within the following days, one to two crows would appear after about 45 seconds. They would make the “CAW, CAW, CAW” food notification sound and other crows would soon fly in to feed. In the weeks that followed, the response time after my initial recall cue to the birds reduced to just over 30 seconds. I would only call out once every 30 seconds and then multiple crows would appear. At approximately three weeks after I introduced the cue, the crows would begin circling just a few seconds after I called for them. They came from all over the neighborhood.

I was going out on an errand one afternoon and decided to pick up the mail out in front (not anywhere near the area where the morning feed occurs). I saw two crows flying high overhead, coming toward me from about two streets away. I called them as they started to pass, and they circled back and landed in the honey locust tree right above where I was standing. It was the most profound experience.

Calling the crows into the yard started out with a group of five or six crows. By the end of the four months, there were days when up to 73 crows visited! Crows are opportunistic; crow families will drop down for a meal if they fly by and see other groups of crows feeding. I believe crows are more territorial when unexpected visitors arrive; there were multiple sentries calling out. On the day of 73 visitors, the noise was incredibly loud for a back yard!

The six squirrels who typically frequent the feeding site act like they own the yard. They will jump off of the railroad ties lining the flower garden with their forearms spread out like a superhero, their trajectory taking them into the center of smaller ground-feeding birds, causing the birds to scatter before the squirrel delicately selects a sunflower seed.

But even the squirrels were a bit intimidated by all the crow visitors that day.  They stayed feeding on the sidelines with multiple larger crows, who appeared to be more dominant in their groups, in the main area of the yard (in studies of other species of crow, researchers have correlated size and social dominance).

On occasion, one of these larger crows would make a distress call (one very loud sharp “CAW”), and all the birds would take off in flight. It was pretty amazing to see. There was no evidence of danger like a hawk, a person, or a neighbor dog, so I wondered whether the distress call was being used deceptively, to disperse the group—it would be a great way to reduce the number of party crashers. Sure enough, when the birds returned to the feeding area, the numbers were cut in half!

On Christmas Eve, I was discussing my observations of crows with some guests. They asked if I could call them. We went out to the deck, and I called for them. Immediately, six crows flew into the yard from all directions. They landed on low branches of the Austrian pine and green ash trees. The guests thought it was the best Christmas Eve they had had in a long time.

Camille King, EdD, RN, ACAAB, CDBC, is an applied animal behaviorist who owns Canine Education Center, LLC in Colorado. She specializes in assessment and treatment of dogs with severe aggression and anxiety disorders. Camille conducts professional research on canine stress and mental health issues. When she isn’t working with dogs, she works as an advanced practice registered nurse.