Brie Breathes Easy: Training a Cat to Enjoy an Inhaler 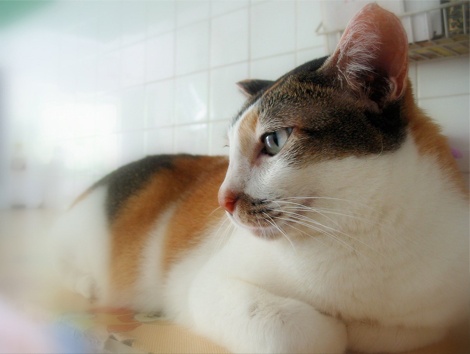 When I took Brie to the emergency vet, his respiration rate was over 80 breaths per minute. His two-day stay in the oxygen kennel receiving IV fluids and additional medications brought his respiration rate back into the normal range. The veterinary specialist confirmed my regular veterinarian’s diagnosis of asthma. Additionally, the echocardiogram revealed an enlarged atrium in his heart—another twist to his physical condition. Brie had been taking prednisolone, an oral corticosteroid, which he is still taking now. However, his enlarged heart meant he needed to switch from oral delivery of the steroid to inhaling it. He came home from the hospital in the afternoon. We had to learn how to work together to use an inhaler by the following morning.

During the afternoon, I got out the components of the special feline inhaler system, Feline Breathe Easy, along with treats for Brie and the other cats (three brothers named Bleu, Cheddar and Colby and two other cats named Reggie and Nutmeg—all of whom showed interest in this process). I assembled the components with the cats’ “help”—I let them sniff everything and gave them treats throughout. To encourage exploration of the inhaler, I rubbed the components of the inhaler with treats so it might be more appealing. Then, I put the apparatus away in the cupboard along with the treats. We repeated this several times.

After several “getting acquainted with the apparatus” sessions, I started a session with targeting my finger and transferred to targeting the mask. I tried using the clicker to speed up the communication between the cats and myself, but there were too many pieces to juggle, so we trained without it. I replaced the clicker with a verbal marker—“good boy”—to tell Brie he was doing what I had asked for. For treats, I got him a roasted chicken and cut it into tiny pieces. He had never had this before, so he was very interested in getting some!

I asked Brie to target on my finger alone, then target on my finger touching the mask, and finally on the mask alone. Once he was more comfortable with the mask, I attached it to the chamber and we repeated the sequence. Once he was comfortable at this step, I inserted the inhaler in the chamber and repeated the sequence again. Then, I put everything (inhaler and the roasted chicken) away until morning.

In the morning, he wasn’t particularly happy about having the “puff” of the inhaler, but we did achieve one administration. I immediately gave him roasted chicken. Twelve hours later, we repeated for duration, as he needs to take 4 to 6 breaths at each administration. He got a small bowl of roasted chicken bits after this puff, which was probably the first to actually deliver the steroid adequately. I also did some TTouch with him, which helped him relax and encouraged trust between us.

One week since starting the inhaler treatments that a friend calls “Cheese Puffs”, we haven’t missed one scheduled treatment. Actually, Brie comes to find me when it is nearing time for a Cheese Puff. I’m pretty sure it is because of the treats he gets afterward!

Ideally, I would have liked more time to develop a positive association with the inhaler, but I don’t imagine anyone who gets a diagnosis of asthma requiring daily steroid treatment has the luxury of time. Although Brie isn’t as excited about training as some of his brothers, the foundation skill of targeting was helpful. With the use of his targeting skill and high-value treats in association with the inhaler, we got off to a good start managing his asthma.

Robin Bisha, PhD, began serious study of cat behavior and training when her beloved and deeply troubled Cheshire Kitten responded well to a basic manners course for dogs. She shares their adventures at http://cheshireloveskarma.com.