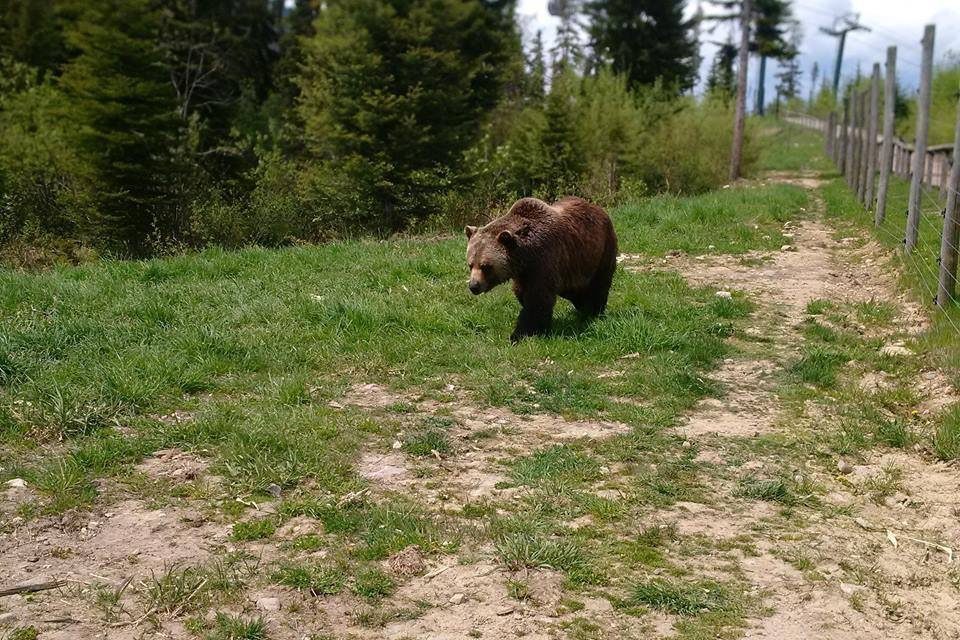 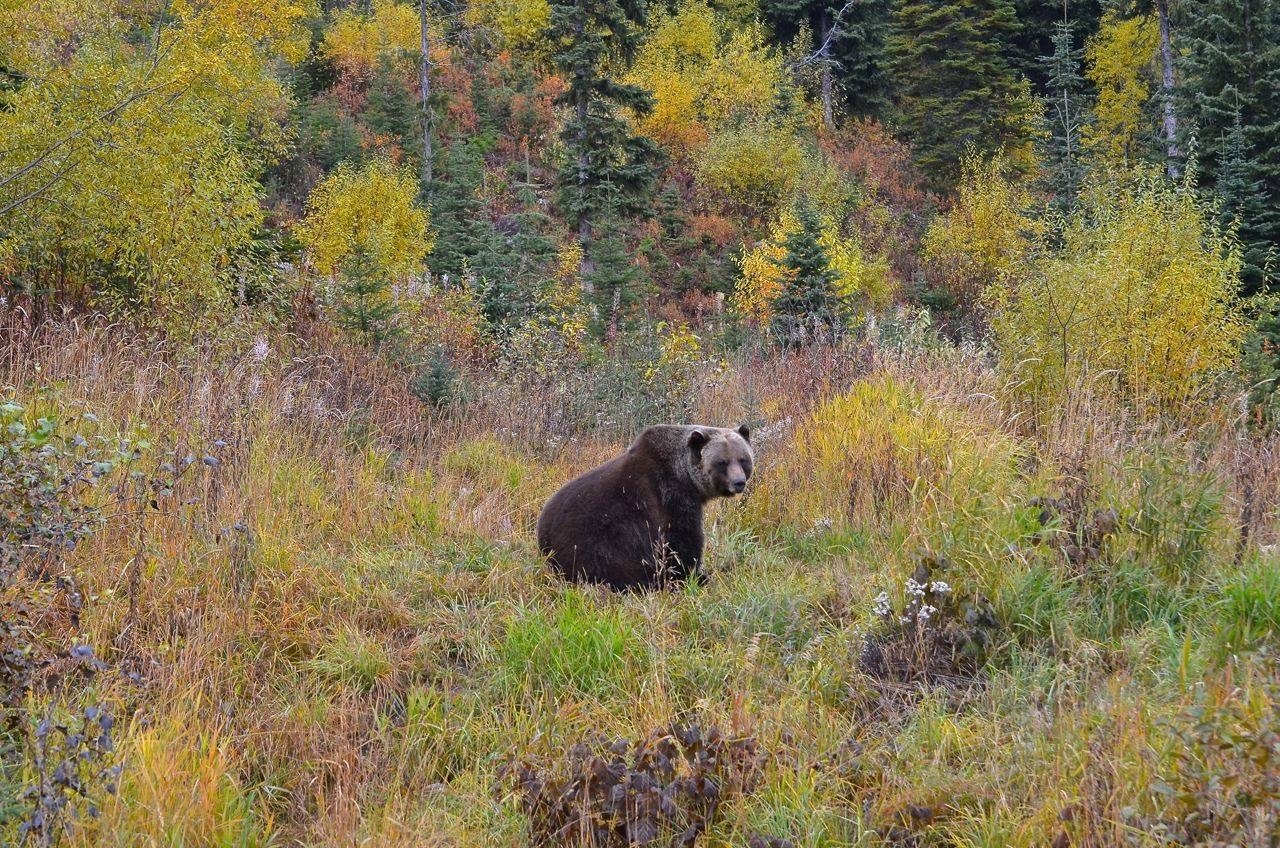 We came to take care of Boo after he and his brother Cari were orphaned at approximately 5 months of age, when their mother was shot by a poacher. They were initially housed at a habitat on Grouse Mountain, B.C., Canada, while a new, state-of-the-art, 20-acre habitat at Kicking Horse Mountain, B.C. was built. Since 2003, Boo has resided in this sub-alpine mountain habitat enclosure, the largest of its kind for a single brown (grizzly) bear. 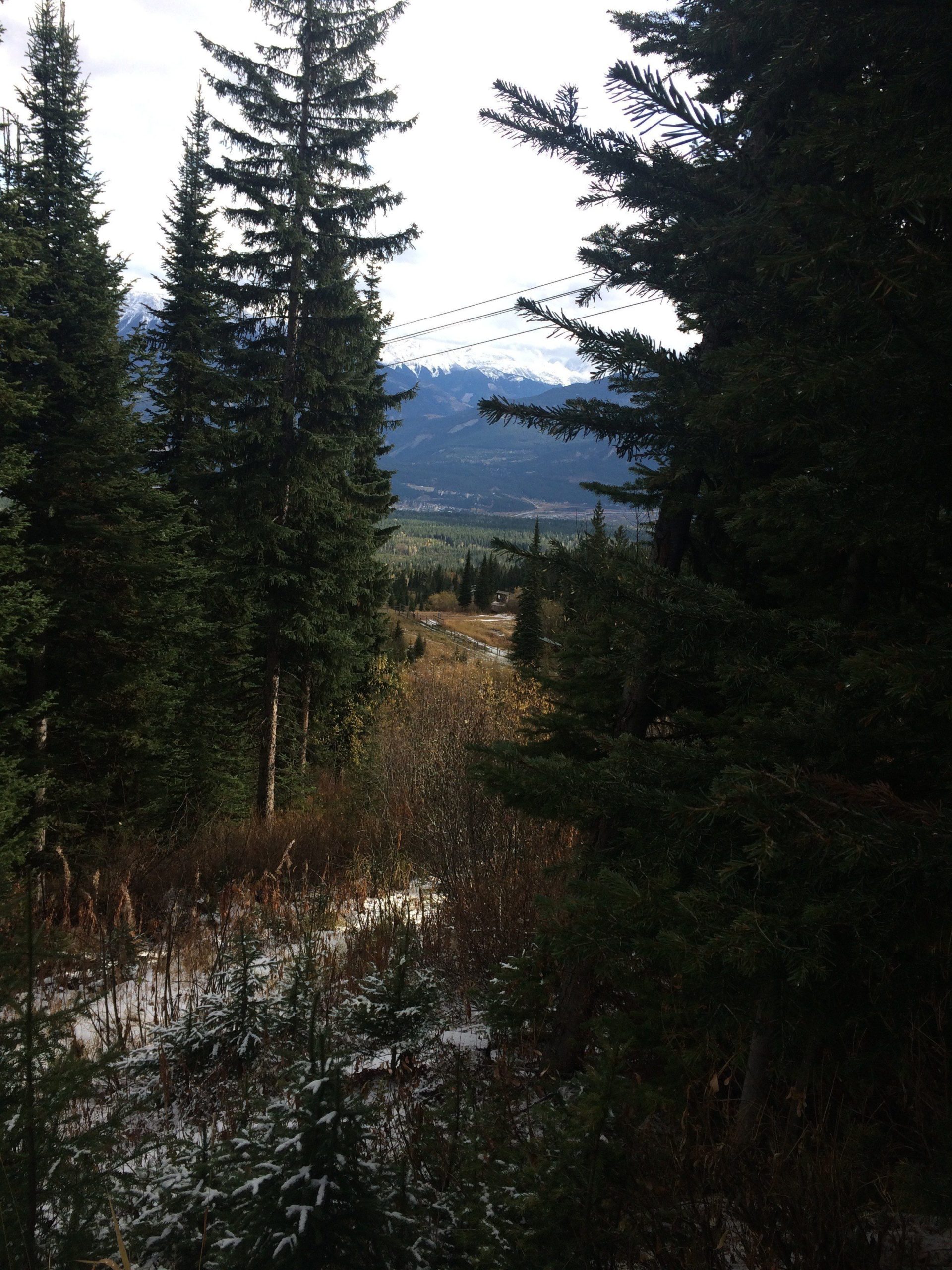 In the winter of 2004, the first year of hibernation after moving to the new enclosure at Kicking Horse Mountain, Boo’s brother Cari died. As there were no cameras in the den at this early stage, caregivers were unaware this had happened until spring. There was a significant change in Boo’s behavior between his initial experience in his enclosure and after the first hibernation period. While we can’t pinpoint the exact reasons, we can speculate that the combination of Cari’s death within the hibernation den, as well as Boo’s experience with necessary veterinary procedures and lock-ups, may have contributed to this change.

In the summer of 2006, Boo escaped from his enclosure. After 16 days he returned to the enclosure on his own.

In the summer of 2011, Boo dug out of his enclosure. After 33 days he returned to the enclosure on his own. To prevent further escapes, Kicking Horse installed metal plates underground below the perimeter fencing. This process took approximately two months, and Boo was locked in his holding pen for the entire time. He showed signs of stress, including pacing and digging, and was eventually sedated to alleviate this.

Boo has a natural den he built himself in his habitat near the top of the enclosure, at the base of a dead tree. It has a beautiful view of the habitat as well as down into the mountain valley.

He also has an artificial den, which is a small log cabin inside the metal fences of his holding area. Unfortunately, due to confinement and safety concerns, he cannot overwinter in the natural den and needs to be locked into the provided holding area. Every year he becomes more wary of this space as it gets closer to hibernation time. In order to be secured for winter, Boo has had to be baited, lured in, and the door closed with an automatic trip wire in order to close the sliding door from a distance. Each year his caregivers have to become more creative in how to convince him to go in when the time comes, as he senses what’s going to happen and becomes resistant to being lured.

Once he is locked in, Boo shows signs of stress including pacing, digging, vocalization, and charging at the caregivers.

Our initial goals in training were to have a reliable method to get Boo from his main habitat into his holding area in case of emergency or evacuation, and to reduce the frequency of stress behaviors when locked into this space. Ideally, we will progress toward having him voluntarily participate in routine vet procedures, such as dental checks and injections.

The first step was to introduce a reward marker (clicker) for Boo. We also wanted to determine what our most effective reinforcers were for each element of the training plan. This would allow Boo to understand the training process, while teaching his caregivers the basics of training.

Training sessions were always conducted with secure barriers between Boo and the people working with him. Each training scenario had its own specific safety setup. When working on targeting behaviors we worked at “den corner,” the first point of contact as we drive up the road toward his enclosure. This space offers a large, flat area for training, with an 8-foot electric fence as a safety barrier. This is also Boo’s isolation area, a 1-acre area for holding if repairs need to be done in the habitat, or in the event a human or another bear enters the enclosure.

The holding area is a space with 12-foot metal fences, and we work from the roof of his attached den. Electric fences run the perimeter of this area. This is where we work on recall training as well as the sliding door (slide) empowerment training.

We started training on June 19, 2017, hoping that we would have enough time to build up a history of positive, reinforcing experiences for Boo in his holding area before the time came for him to be confined. Our plan involved working on two goals: 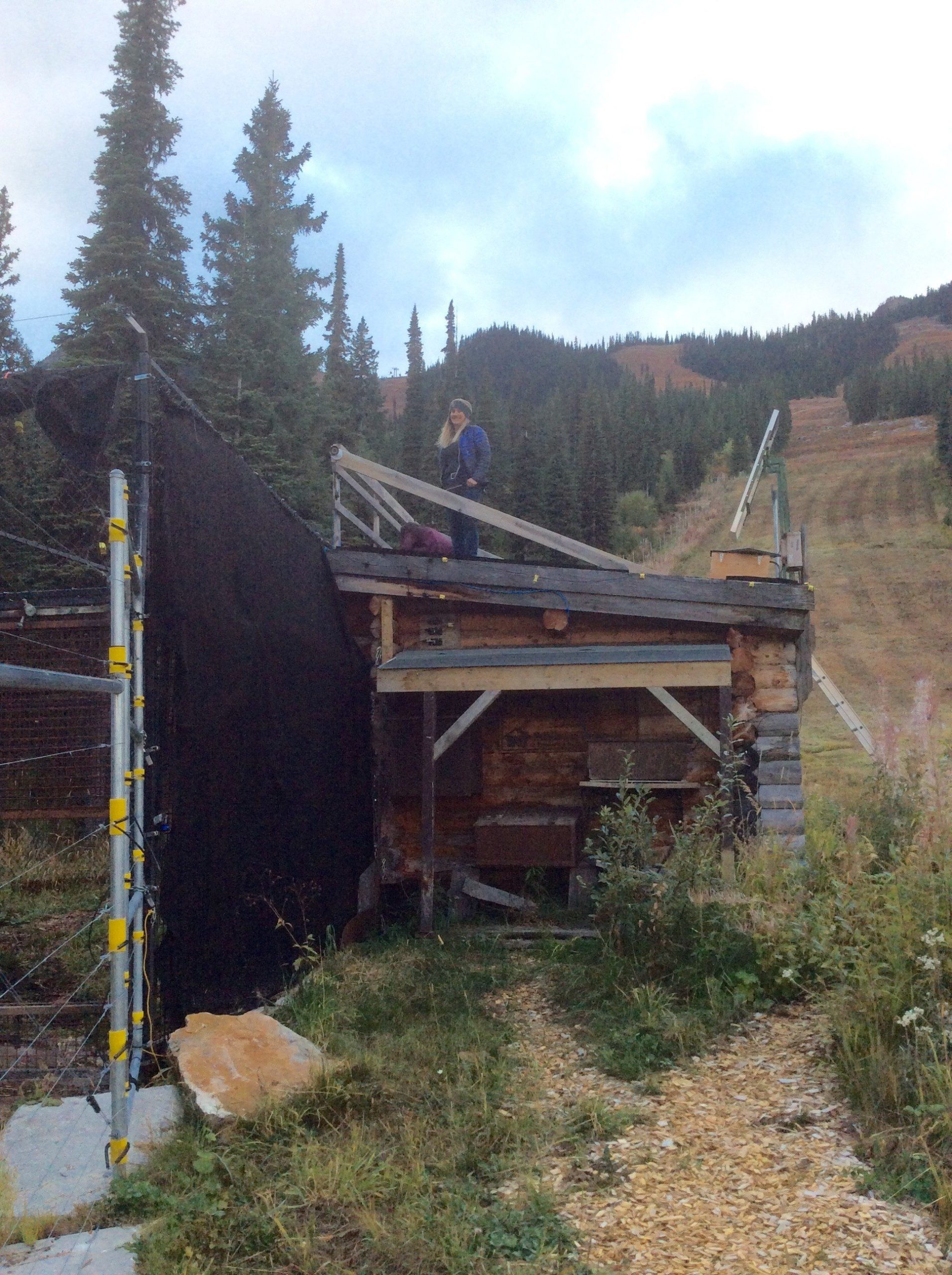 Boo is taught that the “dinner bell” is a predictor of a sardine burrito. We knew from experience that sardines were one of his preferred treats, but as the trainers had to deliver it by tossing it from the roof, we decided to deliver them in a burrito shell. We learned Boo enjoyed the shell almost as much as the fish!

Boo caught on to this very quickly; we introduced the bell for the first time on August 6 and by August 17 it worked with Boo out of visual range. Because his habitat is so large, it sometimes takes a while for Boo to appear. We do not know if he begins moving as soon as he hears the bell or takes time deciding if he is going to come.  Not once in training did we ring the bell without him arriving.

Trainers allow Boo to enter and exit the holding area using sliding doors. Boo has two choices while in the holding area: With both slides closed he receives constant delivery of a high-value reward, such as tuna fudge. If he looks at or moves toward an exit, the food stops and the slide opens. This teaches him that he has a choice over whether he stays in the enclosure or not.

On this day, we noticed that Boo seemed wary of the slides closing. When we closed the slide with Boo inside the holding area, he immediately moved toward the slide to trigger it to open.  Once outside the holding area, he did a significant amount of digging to the area directly outside the open slide. To reassure him, training criteria were relaxed, and we went back to where we started with the slides not fully closed for the next two sessions.

On this day, Boo seemed to understand and trust what we were doing. We were able to fully lock him in for approximately five minutes.

We continued the slide empowerment training for two or three days each week. We slowly decreased the quantity as well as the value of his rewards for being locked in, weaning him from high-value treats to his regular diet. Low-value foods like carrots were being used successfully with the doors closed by the middle of October.

We noticed Boo’s behavior starting to change with the weather. He became far warier of the slides being closed, choosing to take his rewards and leave with them as opposed to staying for more.

Boo’s preferred foods change throughout the year, which is consistent with his wild counterparts. On this day Boo refused the offered elk meat. Traditionally, this is a sign that his metabolism is slowing, and he is getting close to hibernation.  Locking him into the holding area therefore becomes a priority. Boo’s behavior in the holding area also changed drastically from the previous days. He went from being comfortable and choosing to be closed in with only regular dietary supplements such as bear chow, vegetables, and fruit being offered, to refusing any food—including high-value treats such as the sardine burrito—in lieu of the slide being open.

Locked in for winter: October 16

After his sudden behavior change over the last few days as well as predicted snow storms blowing through the area, the refuge manager made the decision to lock Boo in on this day. We rang the bell, and Boo came within three minutes, but then sat outside the west slide, not crossing the boundary into the holding area to receive his sardine burrito. After 25 minutes sitting outside the gate he got up and headed back into the forest in the direction of the isolation gate.

The refuge manager went to the isolation gate and used target training to get Boo to follow her into the isolation area and close that gate to limit him to a one-acre isolation yard including his holding area. Once he was in this area we continued getting him to target between the two trainers, varying distance from each other as well as from the east slide. After a successful target about 4 meters from the slide, we asked for a target about 20 meters farther away from the slide, which Boo was hesitant to move towards. He consistently looked from the distant target stick to the holding area. Once he moved toward the distant target, I moved to the top if his den roof and rang the dinner bell again.

At this point, Boo moved toward the holding area, sat and debated for a few minutes, then entered holding area to receive the sardine burrito. The refuge manager was able to quickly but carefully lower the slide door (other years a trip wire had to be used to close the door remotely).

As soon as the slide door was closed, Boo showed human-directed aggression and intense digging at both slides. This was the first time since the program began that he exhibited this behavior.

Boo offered five minutes of target training. This was significant as it showed us he was still willing to work with us, even within this area where he had been showing stress behaviors.

Once Boo enters his den for 24 hours straight, he has officially begun his torpor state. Most refer to this period as hibernation, but there is a difference between the two. Torpor is the term used to refer to the dormant state bears enter during the long winter months. Boo will stay in his den for approximately four months, but has gone as long as five months.

When spring arrives, bringing warmer temperatures, Boo begins to stir in the den. Each day with increasing activity inside the den he prepares to exit his den by licking and biting his paw pads to toughen the skin up.  Once Boo has emerged from the den he is in what is known as walking hibernation. This is when bears leave their dens and are active, but their metabolic processes have not returned to normal. This stage can last two or three weeks, during which time bears voluntarily eat and drink less and naturally excrete less.

During hibernation, Boo is monitored by an infrared camera located within the ceiling of his den and a thermometer in the den to read temperature and humidity. He is checked on daily, any activity is recorded in a digital observation sheet. The surveillance system is run by solar power backed by batteries.

Training will resume when Boo’s appetite and eagerness to work with us returns.

We have made amazing progress in building our relationship with Boo and teaching him the concept of training and working for rewards. Recall training has been successfully used during an emergency, when another bear got into his enclosure. (This was an issue in the past that led to the death of the other bear by Boo).

We will not know until next spring where our relationship with Boo stands. Slide empowerment training is based on giving the animal control and building trust with his caregivers. When we closed the slide for the last time this past fall, we broke that trust. As he exhibits more natural behaviors than most captive bears, there is very limited research on how hibernation will change our training progress.