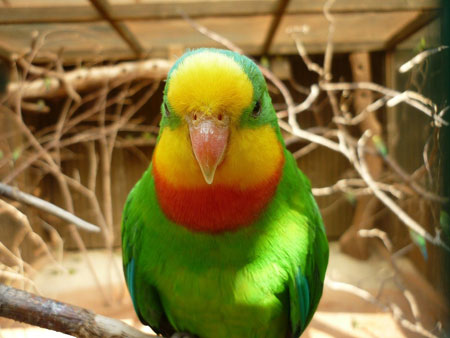 One of the benefits of training with positive reinforcement is eagerness in training. Getting an experienced animal to come to you or stay with you is not usually a problem. Yet the pendulum swings both ways. We must train our animals what they should do instead of being underfoot. One of my horses has taught me the importance of paying attention to emotions while doing this.

All birds, including flightless species such as kiwis and penguins, have an evolutionary history of flight. Flying species, which includes all parrots (psittacines) except the kakapo, have a range of adaptations that allow rapid, sustained flight. Avian metabolism operates at a much higher rate and higher temperatures than in mammals, meaning that birds have warmer blood than we do. Avian body temperature is around 40 degrees Celcius; the resting heart rate of medium-sized birds ranges between 250 and 450 beats per minute. During flight, when the bird flaps its wings, its heart rate more than doubles. Respiration is also both more complex and more efficient in birds than other animals. Birds have a unique air-sac breathing system—by rapidly shunting air around the various air sacs in their bodies, birds have a continuous flow of oxygen-rich air passing across the lungs in one direction. In flight, the movement of the pectoral muscles during flapping assists breathing effort by expanding and contracting the chest cavity. Parrots typically fly at between 35 and 40 miles per hour, so wild birds are able to exploit much larger habitats than those accessible to other creatures. The birds’ high metabolic rate means they have to eat more than mammals of a similar weight, but food is digested very rapidly.

Birds cannot get effective exercise merely by walking and climbing around. For significant aerobic exercise, they need to be able to fly, so that they can use their air-sac breathing system to some effect and raise their heart rate. In captivity, flying birds are more likely to be fit, and fit birds are better able to resist illnesses and remain healthy. A bird that is able to fly every day in an enriching environment may also be less likely to engage in stress-related behaviours such as self-harming.

Wing-clipping—cutting the primary flight feathers to make a bird incapable of flight—is still done to many parrot-like birds, though the practice appears to be much less common in the U.K. than in the U.S. Typically, clipped birds will have some or all primaries on one or both wings cut short, reducing their length by approximately 70 percent. This clipping prevents the bird from gaining height indoors, where the air is usually still. It does not necessarily prevent lift outdoors, since lift is gained in proportion to the wind speed over the bird’s wings. A clipped bird, rendered incapable of lift indoors, could still gain height outdoors in a wind and fly away.

There are both physiological and behavioural implications associated with wing-clipping. Since flight is used as a bird’s key form of escape from stressful situations, clipped birds may become more fearful if they cannot take evasive action immediately and remove themselves from frightening stimuli, or simply if they know they cannot escape such things. Flying birds have no adaptation to being flightless; a flightless wild bird is at imminent risk of death. Also, clipped birds are at risk of damaging any new “blood” feathers when these appear during the moult. This is partly due to the nature of the moulting sequence in psittacines, which differs from most birds. 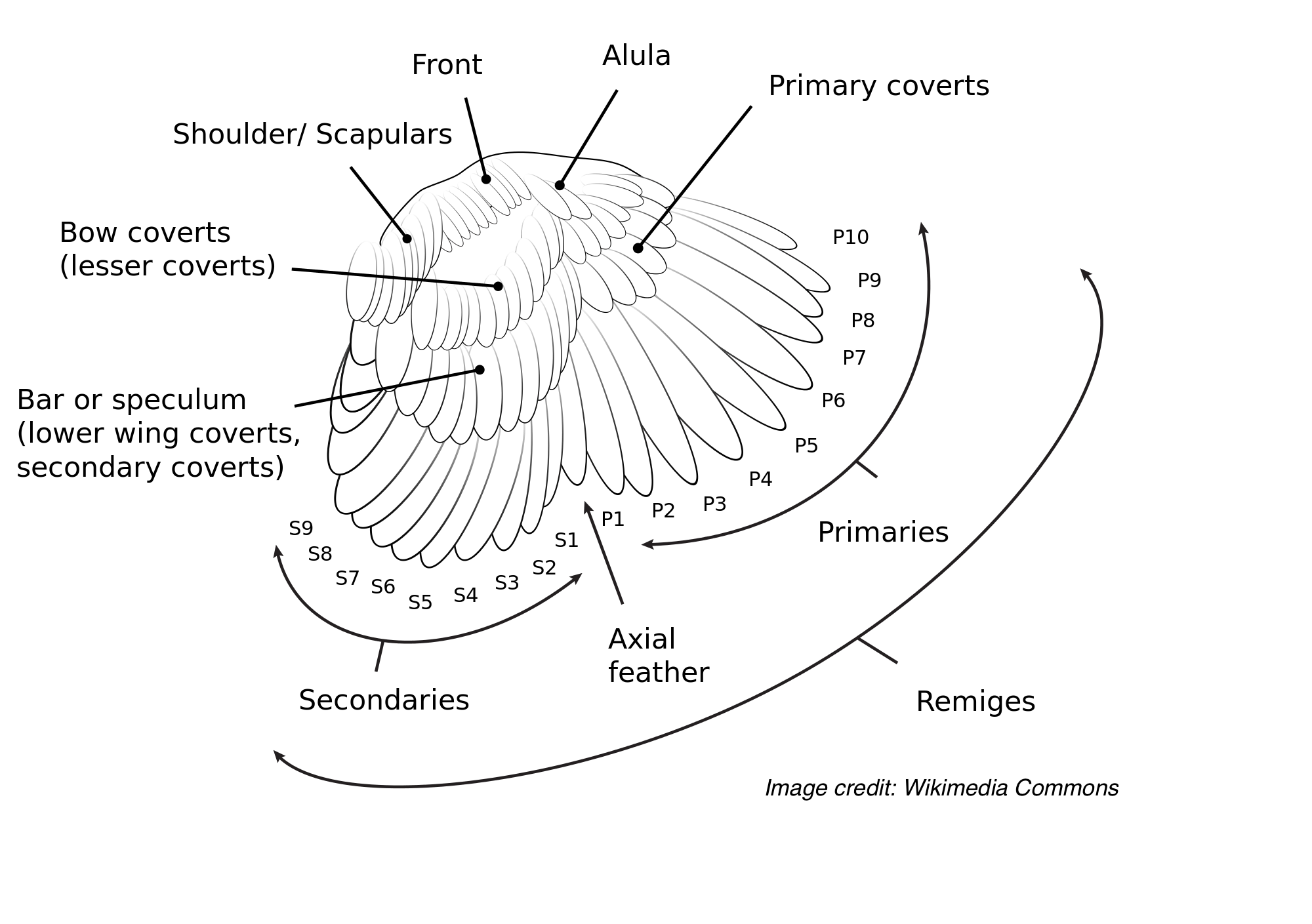 Figure: The anatomy and nomenclature of a bird’s wing feathers

Parrots commence their flight feather moult from a central, not proximal primary (Juniper and Parr, 1998). Typically this is primary number 6. The moult progresses in both directions along the primary web, until feathers P1 and P10 are replaced last. Since the moult starts with a central primary, the new feathers on clipped birds have no older adjacent, full-length feathers to protect the blood feathers as they grow, so they are liable to break and bleed should the wing strike against any hard surface. Bleeding occurs from the damaged feather shaft, not blood vessels, and can continue for some time. This is difficult for owners to address. Although in theory wing-clipping has only a temporary effect, flightlessness can become a permanent disability if feathers are consistently damaged and fail to grow.

I have measured flight feather growth rates in several species of parrot and found it to be between 3 and 5 mm per 24 hours. This fairly uniform growth rate explains why small birds can complete a moult in a few weeks, whereas larger parrots can take many months to complete the same process. At the rate of 4 mm per day, for example, it takes a grey parrot or Amazon nearly seven weeks to grow one primary feather measuring 190 mm.

Parrots may moult two, and occasionally three, flight feathers at a time. During this time, each new feather on a clipped bird remains vulnerable to damage and bleeding. Avian vets can repair a bird’s clipped wings by imping. This is where donor feathers from the same species, are glued and splinted onto the shafts of the clipped feathers. This protects any growing blood feathers and can restore flight immediately. I have a collection of feathers for imping the most commonly kept parrot species; if you would like some, send me an email.

Why some birds are still clipped

The most common reasons I have heard stated for clipping are:

These issues can all be addressed with appropriate management and training.

In the U.K., according to John Hayward who runs the lost and found service with the Parrot Society, most of the escaped birds they come into contact with have been clipped. Owners of clipped birds can have a false sense of security, thinking their bird cannot fly off when outdoors. However, where re-growth of two or three primaries occurs unnoticed by the bird’s carer, then the bird can easily gain height in a light breeze and fly off. When a bird does escape, but cannot fly, it is more vulnerable to attacks from raptors, dogs, and cats, or being killed by road traffic.

By teaching a bird some basic flight requests (see the winter 2017 issue of the Journal) and introducing it carefully to potential hazards such as a windows and mirrors, indoor flight can be very safe.

I am sometimes asked about flying parrots at liberty, outdoors, and if this can be done safely.  This is a complex and controversial issue; I do have some experience with liberty flight in a few species of parrots (and some passerines).

There are many issues to consider before thinking of liberty flight. Parrots do not usually fly alone, but in pairs or as a flock of birds. Being social animals, they get considerable security from group flight; this is something we cannot usually provide. So, if a lone bird experiences fear-inducing events, recall may not work and the bird can become lost. Parrots often respond to the calls of wild passerine birds and know their functions better than their keepers. Few bird keepers know the difference between a passerine’s warning of a hawk, or how this differs from warning of ground-level threats, or a mere contact call. Some wild birds’ distress calls may be inaudible to humans but very clear to parrots. Again, these can induce panic in flight, overriding the keeper’s attempts at recall. Parrots may also land on other people’s property, and it may be impossible to get to them if they do not return voluntarily.

Falconers commonly fly their birds with radio transmitters fitted, so their location can be traced should they become separated from the falconer. Raptors usually accept their transmitters easily, and they do not have the crushing strength in their beaks to destroy, remove, or ingest them. Parrots, however, can easily remove such devices from their bodies.

Liberty flight may be feasible where the bird’s owners have trained their bird to as reliable a recall as one can get. But such flying needs to be done in a suitable place where access to the bird can be had at any time. It is vital that the bird’s carer has a very good understanding of all the things that might spook their bird, and know how to avoid these. Generally, the better alternative to flying outdoors is to have a large, naturalistic aviary. This can be a permanent housing for the bird (with shelter, heating, etc. provided as needed), or used for flying during the day, with the bird being brought indoors before nightfall.

Regular daily flight is what parrots are adapted to do, and flying is one of their essential behavioural needs. Providing for flight is vital for their physical and mental well-being. More people are now realising this, so it is hoped that birds will no longer be deprived of this most necessary aspect of their lives as highly active animals.

Greg Glendell BSc (Hons) works as a companion parrot behaviour consultant in the U.K., based in Somerset. He has written several books on bird care and training. He has worked on several bird welfare campaigns to improve the lives of these animals. Greg’s original interest was in wild birds where he carried out surveys for ornithological societies in the U.K.